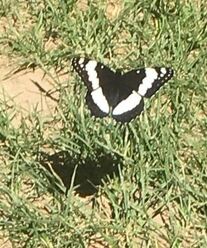 Photo by Regan Barnes
Momivate’s symbol is a butterfly.
Let me share this little parable with you to help you understand why!
​See if you can figure out how it connects to these thoughts on imperfection!

By the way, I love how this photo shows the shadow of the butterfly --
​and that the shadow is roughly the shape of a HEART!

Photo by Luke Brugger on Unsplash
Katie, like all caterpillars, spent lots of time eating leaves.
​Day-in and day-out, her routine consisted of eating, sleeping, grazing on the greenery, napping, and awakening for more of the same.
​ 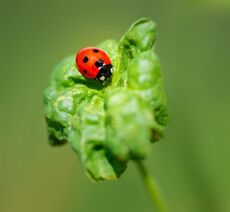 Photo by Robert Navarro on Unsplash
Every once in a while, she would look around and notice bits and pieces of life beyond her leafy surroundings: a poor legless worm getting yanked out of the mud by a bird, or creepy-crawlies whose legs numbered many more than her own, shimmying through the soil.
A lovely red bug with black polka dots was her favorite. It initially appeared to be just a colorful, semi-spherical little critter. But Ta-Da! Without warning, its domed back would break open and become WINGS, lifting the bug above the dirt, transporting it to another part of the garden. This delighted Katie! Whenever she caught sight of such a bug, she would gladly stop mid-munch to stare with anticipation, hoping to see its magical transformation to flight. 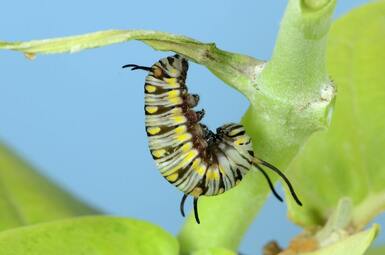 Photo by Bankim Desai on Unsplash
Katie knew some older caterpillars, who were much more well-endowed than herself. She would chomp away with the goal of gaining a more robust physique like theirs. One day, she looked around, wanting to compare her thickening stomach to the others, but they were no longer lingering on their leaves. As Katie considered the possible cause of their absence, she caught sight of the ladybug, wings sprouting from its back. Her eyes eagerly followed its flight up, up, up beyond the leaves of the milkweed above. There, a strange sight required Katie to shift her gaze away from the ladybug. Hanging off the bottom of one of the leaves, her missing friends were doing some kind of abdominal exercise! Their bodies curled from the bottom up towards the top but didn’t even make it half-way, so that their form was shaped like the letter J...
Katie was astounded, enthralled, and appalled all at once. How did her fellow caterpillars get up that high? And why did they hang so precariously upside-down and then curiously twist back upwards as though they regretted their position? She forced her eyes to stop staring and to focus on the lobed leaf at her feet, meant to be her next meal. Her eyes obeyed her command, but her thoughts could not be brought back down.

Her vision had been expanded! Her hopes had been lifted! There *was* more to life than smelling soil, consuming compulsively, and comparing critically. Her brain began to plan her own ascent, though she felt a bit silly thinking of joining them in their inexplicable antics. Was she brave enough to climb the stem? Would her stubby legs have the traction necessary to work against gravity? Did she dare do the dangerous J dance?
​After a few days of talking herself into it, Katie determined she would try. She directed her gaze at her friends – and to her horror, in the exact place where they had suspended their bodies and arced themselves so oddly, there were no caterpillars! Some unmoving, hard-shelled objects were in their place. Where had her friends gone? Could those unidentifiable items be predatory insects that had consumed her friends? Katie couldn’t think straight, and frantically felt all the more compelled to approach the strange objects, wanting to gather more information. 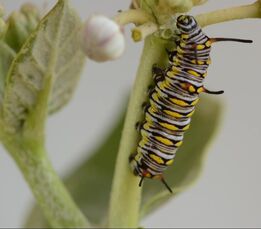 She impressed herself with how nimbly her now-bulging body could wiggle upwards along the stem of the plant. Something innately invited her to the underside of a nearby leaf. She obeyed her instincts, feeling a bit at odds with the lack of logic to hang upside down, then stretch back up. Oh, how such intuitive stretching released chemicals she didn’t even know were within her! A surge of visceral substances exploded from her, though they were somehow magnetized back towards her.

​Katie was in awe at her new ability to wrap herself in nourishing bonds, but she also reeled with the sense that her world was closing in on her. Oh, no! Where was the light going? Could she handle being encased in darkness? Was this the end? Was she ready for such an abrupt loss of freedom? Such an exhilarating discovery of a capability she never knew she possessed but was leading to her demise! As questions and concerns swirled in her mind, silky threads swirled around her body, eventually shut out the light and then the world… Her eyes shut, too. … 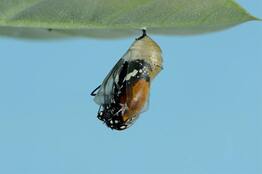 Quivering. Trembling. Shakiness slowly awakens Katie’s consciousness. She reasons: “If I can move, I must still be alive! Maybe I can open my eyes...”

Yes! her eyes open and detect light through the disintegrating fabric that had zippered her away from anything familiar. She senses that by twitching she can break apart these bonds and be released back to the compelling comfort of the frilly fronds. She’s hungry and needs a good meal. She wiggles and jiggles to slice through the threads. She’s surprised that, in response to her mindful attempts to rupture the shell, sleek, long legs extend from her body – not the stubby ones that had dutifully brought her up the branch. And there are only four! Where had all her other legs gone? Could she bear being so handicapped?

As Katie continues to squirm to rescue herself from the self-woven bindings, she becomes aware of a damp pile of material attached to her back, neatly folded and aligned with her now-slender body. What could this be? She cranes her neck to try to get a better view, commanding her shoulder muscles to twist and rotate. Suddenly, wet wings unfold. WINGS! She can scarcely grasp the concept that they are attached to HER!
​ 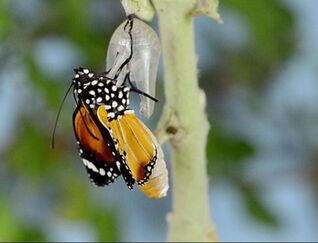 Photo by Bankim Desai on Unsplash

​Her plan to find a meal safely on the top of the leaf has suddenly lost all appeal, despite her hunger. Her appetite changed instantaneously as she realized her potential to FLY! To raise herself up, up, up far above those green beginnings. She now wants to push off and find other colors, seek out flowers, and fill herself with sweet nectar. She shakes off more of the moisture and spreads her wings a bit wider. Her peripheral view of her wings’ bright colors and black dots remind her of the inspirational ladybug.

​Katie wonders if any caterpillars from the lower leaves were watching her as she broke free from her cocoon. Would they realize that wings were in their future? Would they follow their instincts despite the logical oddities and seeming impossibilities?

Momivate is for caterpillars who want to discover their wings! Please join our "MomUnity" and we'll empower you to elevate your motherhood!